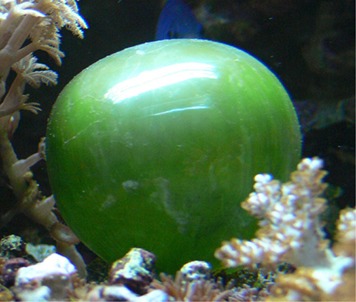 The cell of the unicellular algae Ventricaria ventricosa is one of the largest known, reaching one to five centimeters in diameter. Like all single-celled organisms, V. ventricosa exchanges gases across the cell membrane. What adaptations would V. ventricosalikely have evolved related to its large size and ability to exchange materials with the outside environment?
33.
In the past, the Earth has experienced environmental changes, which have changed the amount of available oxygen and carbon dioxide in the water and air. For example, there is evidence of less oxygen available in the air during the time of the dinosaurs, a result of high volcanic activity creating a large amount of carbon dioxide. How might red blood cells in the dinosaurs have evolved, in terms of size and shape, to adapt to the lower-oxygen atmosphere?
34.

Figure 30.10 shows a human alveolus, which is part of the respiratory system. What do arrows A and B represent in the diagram?

Intubation is a procedure used by ambulance crews that allows a person to breathe if part of the respiratory system is blocked by a foreign object (or otherwise injured). During intubation, a long, plastic tube is placed in the respiratory system so that air can bypass the obstructed area and reach the lungs. Typically, air is supplied artificially using a squeezable bag that connects to the top of the tube. The illustration shows the human respiratory system. The nasal cavity is a wide cavity above and behind the nostrils, and the pharynx is the passageway behind the mouth. The nasal cavity and pharynx join and enter the trachea through the larynx. The larynx is somewhat wider than the trachea and flat. The trachea has concentric, ring-like grooves, giving it a bumpy appearance. The trachea bifurcates into two primary bronchi, which are also grooved. The primary bronchi enter the lungs, and branch into secondary bronchi. The secondary bronchi in turn branch into many tertiary bronchi. The tertiary bronchi branch into bronchioles, which branch into terminal bronchioles. The diaphragm pushes up against the lungs. There is an intubation site indicated at the beginning of the pharynx. A patient has been surgically intubated in the location shown in the diagram. Based on this information, explain where the injury likely occurred in the patient’s respiratory system. Justify your answer. 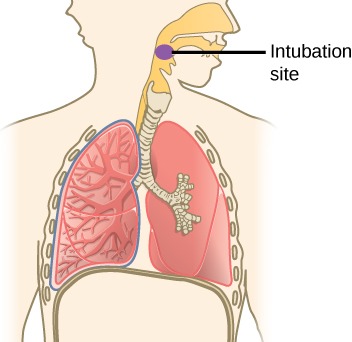 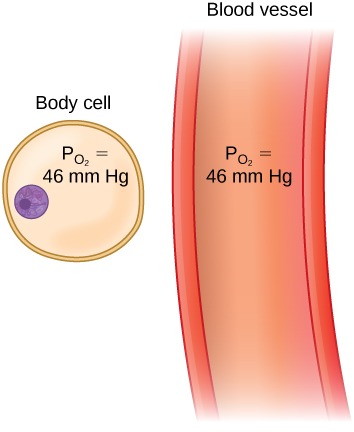 Our body systems work to maintain homeostasis by adjusting when body cells need more oxygen or are experiencing a buildup of carbon dioxide. How would the body likely respond if some of its cells were experiencing the situation pictured? 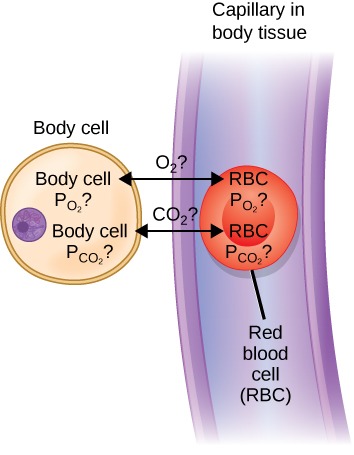 The diagram shows a red blood cell in an alveolus and then in a body tissue. In which direction should the arrows point for the diffusion of oxygen and CO2? How should each partial pressure (body cell and RBC) be labeled as “high” or “low” to accomplish this diffusion? 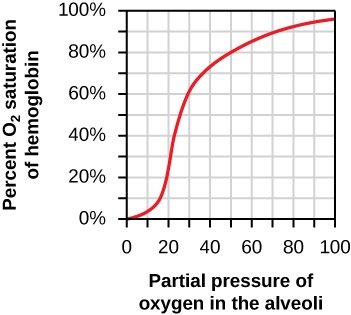 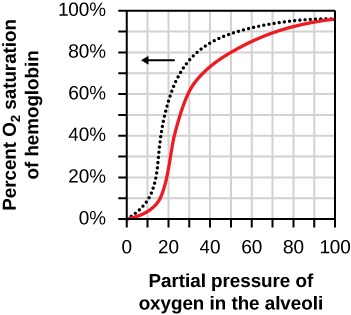 The graph shows an oxygen dissociation curve for hemoglobin. Based on the graph, what would likely cause the curve to shift to the left, as shown by the dotted plot line?
40. 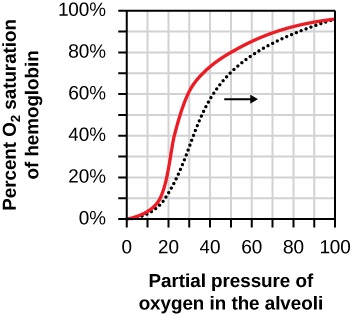 The graph shows an oxygen dissociation curve for hemoglobin. Based on the graph, what would likely cause the curve to shift to the right, as shown by the dotted plot line?