Which of the following aspects of Darwin’s theory of evolution does the story of the peppered moth most clearly illustrate?

In the late 1900s, England cleaned up its air, and pollution decreased. The bark of trees went from dark to light.

Which of the following outcomes to the populations of peppered moth would you expect given this environmental change?

Commonly used in biology textbooks, the peppered moth is a classic example of evolutionary change in action. The example describes changes in a population’s allele frequencies-a small-scale change, evolutionarily speaking. The presence of both light and dark forms within the gene pool is demonstrated by the story, but the peppered moth stays a peppered moth.

Which scenario, if it were to occur, would be a model for large-scale evolutionary change?

45.
Given your understanding of evolutionary theory and the relationship between evolution and the genetic makeup of populations, which statement is false?
46.
Each of the following observations comes from a different scientific discipline. Which is the best support for Darwin’s concept of descent with modification?
47.
Paleontologists have recovered a fossil for an organisms named Archaeopteryx. It has many features in common with reptiles, but, like birds, shows evidence of feathers. For what aspect of evolutionary theory does this piece of evidence suggest support?
48.
Which of the following pieces of evidence illustrates evolution as an ongoing process?
49.
The process of mutation, which generates genetic variation, is random. Thus, life has evolved, and continues to evolve, randomly. Which statement is an appropriately evidence-based refinement of the above?
50.
The selective breeding of plants and animals that possess desired traits is a process called artificial selection. For example, broccoli, cabbage, and kale are all vegetables that have been selected from one species of wild mustard. How is artificial selection both similar to and different from Darwin’s conception of natural selection? Does artificial selection provide evidence for evolution by natural selection? Explain.
51.
Genes important in the embryonic development of animals have been relatively well conserved during evolution. This means they are more similar among different species than many other genes. What explains this genetic conservation across animal species?
52.
The upper forelimbs of humans and cats have fairly similar structures. In contrast, the upper forelimbs of whales (their flippers) have bones with a different shape and proportion from both cats and humans. Interestingly, genetic data suggests that all three organisms have a common ancestor from about the same point in time. What is a likely explanation for these data?
53.
Biogeography is the study of biological species as they relate to geographical space and geological time. The fossil record shows that dinosaurs originated about 200 to 250 million years ago. Would you expect the geographic distribution of early dinosaur fossils to be broad (on many continents) or narrow (on one or a few continents)? Explain.
54.

The term microevolution describes evolution on its smallest scale: the change in allele frequencies in a population over generations. DDT is a pesticide that was widely in use in the United States from the 1940s until 1972. The table below summarizes a particular allele frequency in laboratory strains of the common fruit fly, Drosophila melanogaster

Using this information, describe a model in which natural selection improved the match between D. mealanogaster and its environment through microevolution.

In 1795, a Scottish geologist named Charles Hutton suggested that Earth’s geologic features could be explained by gradual processes that were still operating. This was in direct contrast to other scientific thought at the time, which included well-accepted proposals that geologic layers were representative of catastrophic events caused by processes no longer operating in the present time. Hutton proposed geologic features as the result of slow and consistent change, such as valleys formed by rivers wearing through rock. Hutton’s ideas were incorporated in the work of Charles Lyell, a geologist working in Darwin’s time. Lyell advocated a principle called uniformitarianism, the consistency of mechanisms of change over time. In other words, Lyell argued that the same geologic processes operating in the present had operated in the past, and at the same rate.

The ideas of Hutton and Lyell influenced the work of Charles Darwin. How do Hutton’s and Lyell’s ideas connect to and provide support for Darwin’s theory of evolutionary change?

56.
The human immunodeficiency virus (HIV) reproduces very quickly. A single virus can replicate itself a billion times in one 24-hour period. In a hypothetical treatment situation, a patient’s HIV population consists entirely of drug-resistant viruses after just a few weeks of treatment. How can this treatment result best be explained? How does this explanation illustrate that evolution is an ongoing process?
57.

A friend says: “Natural selection is about the survival of the very fittest in a population. The fittest are those that are strongest, largest, fastest.”

Would you agree with that statement? Explain. What evidence from scientific disciplines can you offer to support your agreement or your disagreement?

A student placed 20 tobacco seeds of the same species on moist paper towels in each of two petri dishes. Dish A was wrapped completely in an opaque cover to exclude all light. Dish B was not wrapped. The dishes were placed equidistant from a light source set to a cycle of 14 hours of light and 10 hours of dark. All other conditions were the same for both dishes. The dishes were examined after 7 days, and the opaque cover was permanently removed from dish A. Both dishes were returned to the light and examined again at 14 days. The following data were obtained:

Which of the following best supports the hypothesis that the difference in leaf color is genetically controlled?

61.
Populations of a nocturnal toad live along a long river. On the other side of a band of territory that is about 10 kilometers wide, there are populations of a toad that appear similar. Which of the following data would provide compelling evidence that the two populations represent different species?
62.
A group of students summarized information on five great extinction events. The students are sampling a site in search of fossils from the Devonian period. Based on the chart, what would be the most reasonable plan for the students to follow? 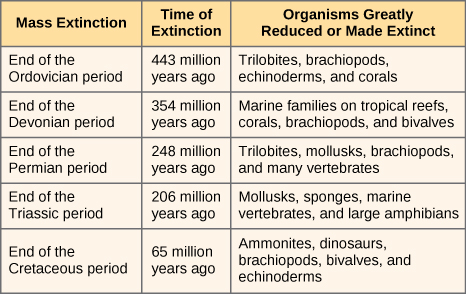 Explain how the two types of data you suggested provide a direct answer to the question of whether speciation has taken place.

Assuming a population that has genetic variation and is under the influence of natural selection, place the following events in the order in which they would occur:

66.
A biologist studies a population of voles for 20 years. During almost the entire research period, the population stays between 50 and 75 individuals. Additionally, fewer than half of the voles born do not survive to reproduce, due to predation and competition for food. Then, in one generation, 80% of the voles born live to reproduce. The population increases to 110 individuals. What inferences about food and predation can you make for the singular generation in which 80% of offspring survived? What prediction can you make about the genetic and phenotypic variation of future populations for this group of voles?
67.
There are years of drought in a small, relatively isolated community. During the drought, small seeds with thin shells become rare. Large seeds with hard cases become increasingly common. The large, tough seeds are successfully eaten by birds with large and broad beaks. Assuming that the drought continues and the population of birds in the community stays isolated, what predictions for the population can you make under the influence of natural selection?
68.
At one time, avian researchers in the Sulawesi region of Indonesia described the Flowerpecker populations on the mainland and the Wakatobi archipelago as one species. A recent reassessment of the Wakatobi populations resulted in the suggested reclassification of these populations as a distinct species, the Wakatobi Flowerpecker. Which of the following pieces of evidence, if true, would be cause for this reclassification?
69.
What pattern in the fossil record would you expect to see to support the model of gradual speciation? How would you expect this pattern to differ from a pattern in the fossil record that supports the model of punctuated equilibrium? Explain.
70.
Until recently, these three species of short-tailed pythons, Python curtus, Python brongersmai (middle), and Python breitensteini were considered one species. However, due to the different locations in which they are found, they have become three distinct species. What is this an example of?
72.
Consider two species of birds that diverged while separated geographically but resumed their contact before reproductive isolation was complete. Which describes the first step in what would happen over time if the two species mated extensively and their hybrid offspring survived and reproduced more poorly than offspring from intra-species matings?