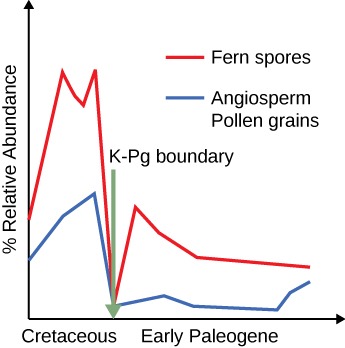 Students analyze pollen grains and fern spores recovered from sediments taken below and above the Cretaceous-Paleogene boundary. Their results are summarized in the graph. Which of the following conclusions can be drawn from the graph regarding the impact of the mass extinction that took place at the K-Pg boundary on plants?

Analyze the graph and discuss the reasons for the fern spike seen in the early Paleogene, considering ferns were the first plants seen on the ground after the volcanic eruption of Krakatoa and Mt. St. Helens. Propose reasons for the observed increase in fern spores following the mass extinction.

A group of students summarized information on five great extinction events.The students are sampling a site in search of fossils from the Devonian period. Based on the chart, which of the following would be the most reasonable plan for the students to follow? 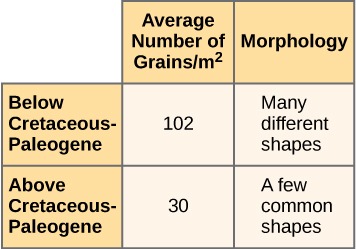 The results are summarized in a table.

Can you explain the results?

A dig in a farmland soil rich in calcium carbonate reveals the following findings: 1. Numerous shells of bivalves 2. Chips of corals 3. The partial imprint of a trilobite 4. A few vertebrae dated to 250 million years ago. The table of extinction summarizes information on the five major extinction events.

According to the table of extinction, which conclusion about the fossils is most reasonable? 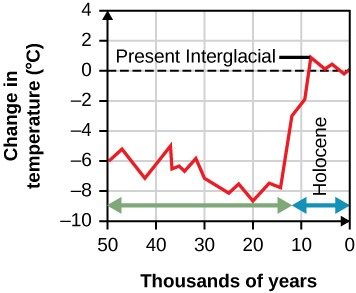 The average temperatures varied during the Pleistocene as glaciation periods were followed by warm intervals. Using the graph above and your existing knowledge, discuss what happened to woolly mammoths and other cold-adapted megafauna 10,000 years ago. 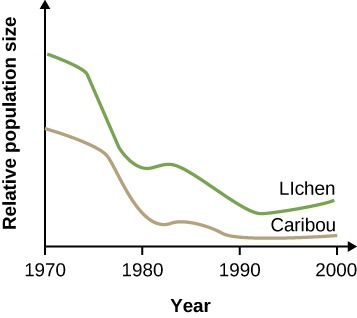 In winter, lichens are the only food for the caribou herds that roam the tundra. As the average temperatures increase with climate change, the lichen are gradually being replaced by shrubs and trees in the southern parts of the tundra. The graph illustrates the changes in abundance of lichens and caribou over time in a regional forest of Canada.Which statement best explains the changes in the caribou population between 1975 and 1980?

A chain within the food web in the arctic ocean is shown below:

If polar bears move to land to hunt due to loss of sea ice, what will happen to the balance of the food web? 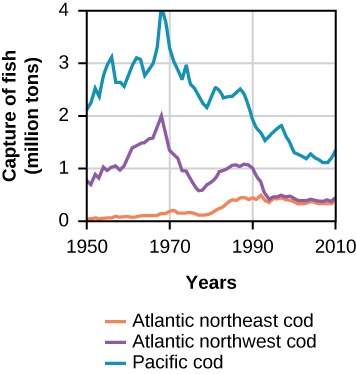 Historically, the Atlantic Ocean off Canada and the Northeast of the US has been some of the richest and most popular fishing grounds. Huge factory ships developed in the 1960’s converged on the region from all over the world attracted by the rich catches. The graph shown represents the population of cod in recent years. Based on the graph, what is the likely explanation for the collapse of the northwest cod? 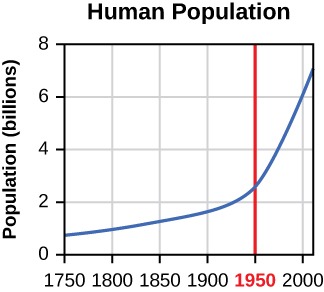 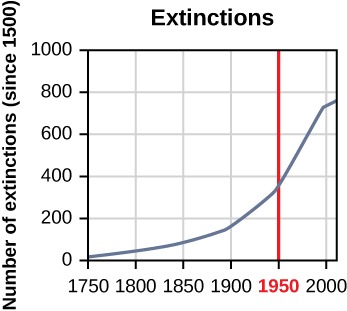