35.
Producers and consumers are necessary for ecosystem function and for energy to pass through an ecosystem. What might happen in an aquatic system with excess producers relative to consumers?
36.
Energy is a fundamental component in an ecosystem and is contributed by the primary producers. Describe how light energy can, in turn, support the consumers of an ecosystem.
37.
In a microcosm experiment using fish tanks to mimic a lake environment, an increase in the number of stickleback species would increase the dissolved organic carbon particle size. How could this affect primary producers in the ecosystem?
38.
Studies on stickleback fish revealed that the presence of two species of stickleback reduced the amount of algal blooms relative to the presence of one species of stickleback in a microcosm experiment. How does this occur?
39. 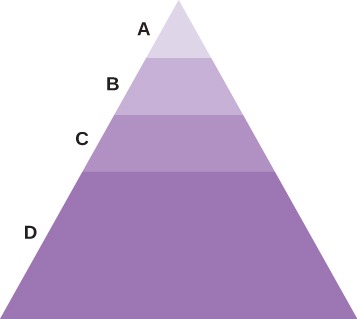 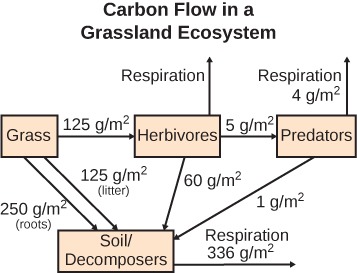 How much carbon (g/m2) is released into the atmosphere as a result of the metabolic activity of herbivores? Give your answer to the nearest whole number.
41.

The following is a food web for a meadow habitat that occupies 25.6 km2. The primary producers’ biomass is uniformly distributed throughout the habitat and totals 1,500 kg/km2. Developers have approved a project that will permanently reduce the primary producers’ biomass by 50 percent and remove all rabbits and deer. Which of the following is the most likely result at the completion of the project? 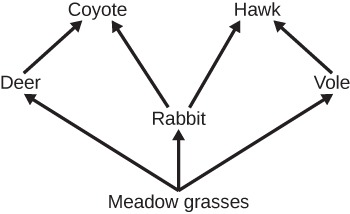 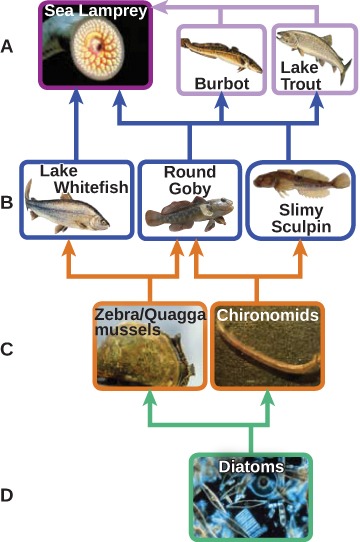 This figure shows a food web of an ecosystem. What would happen to the food web if all of the species of the entire row B was wiped out by a natural disaster such as an oil spill? Why?
43.
Humans are very active in modifying ecosystems worldwide. If a new set of buildings on the edge of a forest block sunlight from reaching the majority of one part of the forest, what might happen to that part of the forest?
44.
If you examined predator-prey relationships within an ecosystem and noticed that the removal of predators also resulted in the die-off of herbivores, what would you suspect occurred?
45.
Although producers are essential for energy to flow into an ecosystem, consumers also have important roles. What might happen in an aquatic system with excess consumers relative to producers?
46.
The following is the equation for trophic level transfer efficiency: (production at present trophic level/production at past trophic level)×100. If primary producers produce 1600 kcal/m2, and primary consumers have 900 kcal/m2, what is the trophic level transfer efficiency?
47.
There are four trophic levels in a food chain and the amount of energy at the trophic level of the primary producer is 33,000 kcal/m2. Which of the following represents the amount of energy of the tertiary consumer?
48.

Why does this figure show a higher value of gross productivity for the decomposers than the tertiary consumers?

49.
One of the key concerns about global climate change is excess amounts of carbon being released into the atmosphere. There are, however, some ways in which carbon can be sequestered from the atmosphere. Which of the following is a natural process that promotes carbon sequestration?