In this section, you will explore the following questions:

Although cells and organisms require free energy to survive, they cannot spontaneously create energy, as stated in the Law of Conservation of Energy. Energy is available in different forms. For example, objects in motion possess kinetic energy, whereas objects that are not in motion possess potential energy. The chemical energy in molecules, such as glucose, is potential energy because when bonds break in chemical reactions, free energy is released. Free energy is a measure of energy that is available to do work. The free energy of a system changes during energy transfers such as chemical reactions, and this change is referred to as ΔG or Gibbs free energy. The ΔG of a reaction can be negative or positive, depending on whether the reaction releases energy (exergonic) or requires energy input (endergonic). All reactions require an input of energy called activation energy in order to reach the transition state at which they will proceed. (In another section, we will explore how enzymes speed up chemical reactions by lowering activation energy barriers.)

The Science Practice Challenge Questions contain additional test questions for this section that will help you prepare for the AP exam. These questions address the following standards:
[APLO 2.5]

When an object is in motion, there is energy associated with that object. In the example of an airplane in flight, there is a great deal of energy associated with the motion of the airplane. This is because moving objects are capable of enacting a change, or doing work. Think of a wrecking ball. Even a slow-moving wrecking ball can do a great deal of damage to other objects. However, a wrecking ball that is not in motion is incapable of performing work. Energy associated with objects in motion is called kinetic energy. A speeding bullet, a walking person, the rapid movement of molecules in the air (which produces heat), and electromagnetic radiation like light all have kinetic energy.

Potential energy is not only associated with the location of matter (such as a child sitting on a tree branch), but also with the structure of matter. A spring on the ground has potential energy if it is compressed; so does a rubber band that is pulled taut. The very existence of living cells relies heavily on structural potential energy. On a chemical level, the bonds that hold the atoms of molecules together have potential energy. Remember that anabolic cellular pathways require energy to synthesize complex molecules from simpler ones, and catabolic pathways release energy when complex molecules are broken down. The fact that energy can be released by the breakdown of certain chemical bonds implies that those bonds have potential energy. In fact, there is potential energy stored within the bonds of all the food molecules we eat, which is eventually harnessed for use. This is because these bonds can release energy when broken. The type of potential energy that exists within chemical bonds, and is released when those bonds are broken, is called chemical energy (Figure 6.7). Chemical energy is responsible for providing living cells with energy from food. The release of energy is brought about by breaking the molecular bonds within fuel molecules.

Figure 6.7  The molecules in gasoline (octane, the chemical formula shown) contain chemical energy within the chemical bonds. This energy is transformed into kinetic energy that allows a car to race on a racetrack. (credit “car”: modification of work by Russell Trow)

Visit this site and select “A simple pendulum” on the menu (under “Harmonic Motion”) to see the shifting kinetic (K) and potential energy (U) of a pendulum in motion.

Explain how the potential and kinetic energy shown in the pendulum model relates to a child swinging on a swing set.

After learning that chemical reactions release energy when energy-storing bonds are broken, an important next question is how is the energy associated with chemical reactions quantified and expressed? How can the energy released from one reaction be compared to that of another reaction? A measurement of free energy is used to quantitate these energy transfers. Free energy is called Gibbs free energy (abbreviated with the letter G) after Josiah Willard Gibbs, the scientist who developed the measurement. Recall that according to the second law of thermodynamics, all energy transfers involve the loss of some amount of energy in an unusable form such as heat, resulting in entropy. Gibbs free energy specifically refers to the energy associated with a chemical reaction that is available after entropy is accounted for. In other words, Gibbs free energy is usable energy, or energy that is available to do work.

Every chemical reaction involves a change in free energy, called delta G (∆G). The change in free energy can be calculated for any system that undergoes such a change, such as a chemical reaction. To calculate ∆G, subtract the amount of energy lost to entropy (denoted as ∆S) from the total energy change of the system. This total energy change in the system is called enthalpy and is denoted as ∆H . The formula for calculating ∆G is as follows, where the symbol T refers to absolute temperature in Kelvin (degrees Celsius + 273):

The standard free energy change of a chemical reaction is expressed as an amount of energy per mole of the reaction product (either in kilojoules or kilocalories, kJ/mol or kcal/mol; 1 kJ = 0.239 kcal) under standard pH, temperature, and pressure conditions. Standard pH, temperature, and pressure conditions are generally calculated at pH 7.0 in biological systems, 25 degrees Celsius, and 100 kilopascals (1 atm pressure), respectively. It is important to note that cellular conditions vary considerably from these standard conditions, and so standard calculated ∆G values for biological reactions will be different inside the cell.

If energy is released during a chemical reaction, then the resulting value from the above equation will be a negative number. In other words, reactions that release energy have a ∆G < 0. A negative ∆G also means that the products of the reaction have less free energy than the reactants, because they gave off some free energy during the reaction. Reactions that have a negative ∆G and consequently release free energy are called exergonic reactions. Think: exergonic means energy is exiting the system. These reactions are also referred to as spontaneous reactions, because they can occur without the addition of energy into the system. Understanding which chemical reactions are spontaneous and release free energy is extremely useful for biologists, because these reactions can be harnessed to perform work inside the cell. An important distinction must be drawn between the term spontaneous and the idea of a chemical reaction that occurs immediately. Contrary to the everyday use of the term, a spontaneous reaction is not one that suddenly or quickly occurs. The rusting of iron is an example of a spontaneous reaction that occurs slowly, little by little, over time.

If a chemical reaction requires an input of energy rather than releasing energy, then the ∆G for that reaction will be a positive value. In this case, the products have more free energy than the reactants. Thus, the products of these reactions can be thought of as energy-storing molecules. These chemical reactions are called endergonic reactions, and they are non-spontaneous. An endergonic reaction will not take place on its own without the addition of free energy.

Let’s revisit the example of the synthesis and breakdown of the food molecule, glucose. Remember that the building of complex molecules, such as sugars, from simpler ones is an anabolic process and requires energy. Therefore, the chemical reactions involved in anabolic processes are endergonic reactions. On the other hand, the catabolic process of breaking sugar down into simpler molecules releases energy in a series of exergonic reactions. Like the example of rust above, the breakdown of sugar involves spontaneous reactions, but these reactions don’t occur instantaneously. Figure 6.8 shows some other examples of endergonic and exergonic reactions. Later sections will provide more information about what else is required to make even spontaneous reactions happen more efficiently. 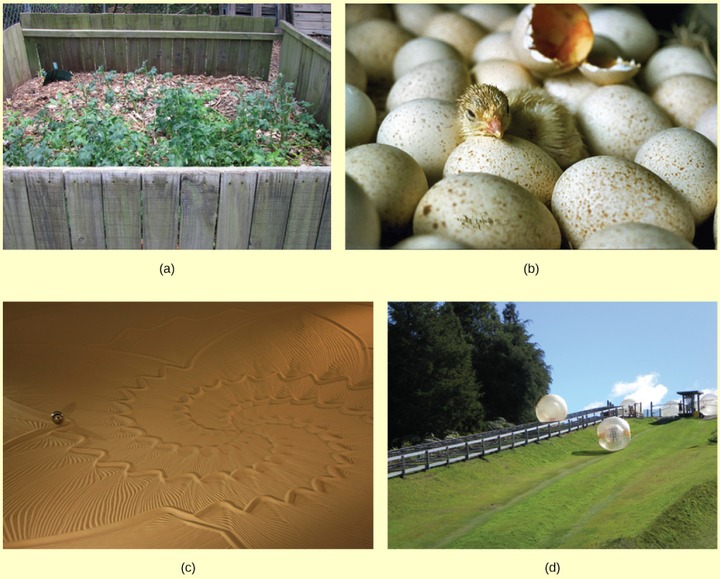 There is another important concept that must be considered regarding endergonic and exergonic reactions. Even exergonic reactions require a small amount of energy input to get going before they can proceed with their energy-releasing steps. These reactions have a net release of energy, but still require some energy in the beginning. This small amount of energy input necessary for all chemical reactions to occur is called the activation energy (or free energy of activation) and is abbreviated EA (Figure 6.10).

Why would an energy-releasing, negative ∆G reaction actually require some energy to proceed? The reason lies in the steps that take place during a chemical reaction. During chemical reactions, certain chemical bonds are broken and new ones are formed. For example, when a glucose molecule is broken down, bonds between the carbon atoms of the molecule are broken. Since these are energy-storing bonds, they release energy when broken. However, to get them into a state that allows the bonds to break, the molecule must be somewhat contorted. A small energy input is required to achieve this contorted state. This contorted state is called the transition state, and it is a high-energy, unstable state. For this reason, reactant molecules don’t last long in their transition state, but very quickly proceed to the next steps of the chemical reaction. Free energy diagrams illustrate the energy profiles for a given reaction. Whether the reaction is exergonic or endergonic determines whether the products in the diagram will exist at a lower or higher energy state than both the reactants and the products. However, regardless of this measure, the transition state of the reaction exists at a higher energy state than the reactants, and thus, EA is always positive.

Watch an animation of the move from free energy to transition state at this site.

Explain why transitional states are unstable.

Where does the activation energy required by chemical reactants come from? The source of the activation energy needed to push reactions forward is typically heat energy from the surroundings. Heat energy (the total bond energy of reactants or products in a chemical reaction) speeds up the motion of molecules, increasing the frequency and force with which they collide; it also moves atoms and bonds within the molecule slightly, helping them reach their transition state. For this reason, heating up a system will cause chemical reactants within that system to react more frequently. Increasing the pressure on a system has the same effect. Once reactants have absorbed enough heat energy from their surroundings to reach the transition state, the reaction will proceed.

Figure 6.10  Activation energy is the energy required for a reaction to proceed, and it is lower if the reaction is catalyzed. The horizontal axis of this diagram describes the sequence of events in time.
How does the change in Gibbs free energy (ΔG) differ between the catalyzed versus uncatalyzed reaction?

All plants use water, carbon dioxide, and energy from the sun to make sugars. Think about what would happen to plants that do not have sunlight as an energy source or sufficient water. What would happen to organisms that depend on those plants for their own survival? How does depletion or destruction of forests by human activity affect free energy availability to organisms living in the rain forest? What measures can be taken to try and restore the free energy to an acceptable level?