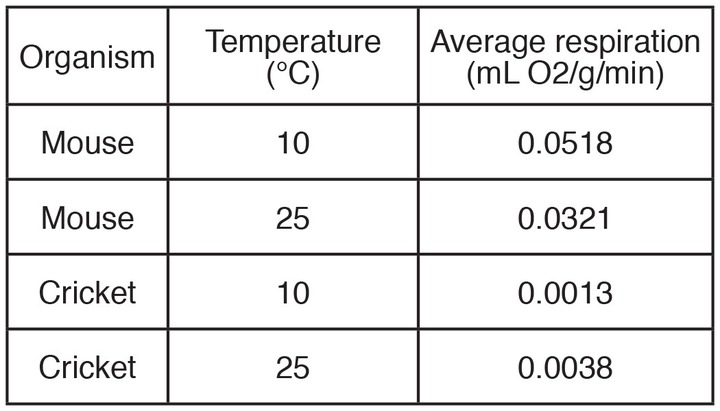 The table shows the amount of oxygen consumed (third column) by different animals (first column) at different temperatures. This type of apparatus measures the change in volume of air to detect the removal of oxygen. However, organisms produce carbon dioxide as they take in oxygen. To provide accurate measurements, what would you need to add to the setup?
43.

According to the data, the crickets at 25∘C have greater oxygen consumption per gram of tissue than do the crickets at 10∘C. This trend in oxygen consumption is the opposite of that in mice. The difference in trends in oxygen consumption among crickets and mice is due to what?
44.
Where in a cell does glycolysis take place in both prokaryotes and eukaryotes?
45.
A new species of obligate anaerobe, a bacterium, has been found that lives in hot, acidic conditions. While other pathways may also be present, which metabolic pathway is the most likely to be present in this species?
46.
What evidence provides the strongest support that glycolysis is an older and more conserved pathway than the citric acid cycle?
47. 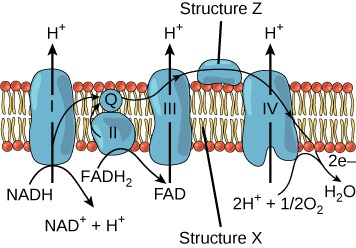 What is Structure X in the graphic?
48.

What would be the most direct result of blocking structure Z in the graphic?
49.

Glucose catabolism pathways are sequential and lead to the production of ATP. What is the correct order of the pathways for the breakdown of a molecule of glucose as shown in the formula?

C6H12O6+O2→CO2+H2O+energy
51.
Which of the following statements most directly supports the claim that different species of organisms use different metabolic strategies to meet their energy requirements for growth, reproduction, and homeostasis?
52.
Which of the following best describes how the citric acid cycle relates to glycolysis, oxidative phosphorylation, and chemiosmosis?