44.
Which of the following organisms appear first in the fossil record?
45.
Why is it challenging to study bacterial fossils and determine if the fossils are members of the domain archaea, rather than bacteria?
46. 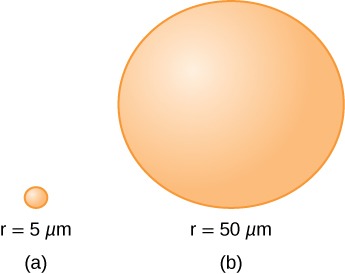 Pictured are two cells along with their radius. What does cell B likely have when compared to cell A?
47.

Consider the shapes. The diameter of the sphere is equal to 1mm and the side of the cube is also equal to 1mm. What is the ratio of the surface to volume ratios for the sphere and the cube?
48.

Which of the following is true regarding the surface-to-volume ratios of the cube and the sphere?
49.
What is the major consideration in setting the lower limit of cell size?
50.
Which of the following structures has the same general structure in Archaea, Bacteria, and Eukarya, pointing to a common origin?
51.
Why does the structure of the cytoplasmic membrane point to a common ancestor?
52.
Which organelles would be present in high numbers in the leg muscles of a marathon runner?
53.
Macrophages ingest and digest many pathogens. Which organelle plays a major role in the activity of macrophages?
54.
You are looking at a sample under a light microscope and observe a new type of cell. You come to the conclusion that it is a bacterium and not a eukaryotic cell. What would you observe to come to this conclusion?
55.
Thiomargarita namibiensis is a large single cell organism, which can reach lengths of 700μm. The cell is classified as a bacterium. What is the main argument to justify the classification?
56.
Radioactive amino acids are fed to a cell in culture for a short amount of time. This is called a pulse. You follow the appearance of radioactive proteins in the cell compartments. In which organelles and in what order does radioactivity appear?
57.
With which cellular structure does the extracellular matrix interact?
58.
Which structure or structures allow bacteria to move about?
59.
Cells lining the intestine absorb a lot of nutrients. How did those cells adapt to their function?