Faculty in the Division of Natural Sciences

Cemeteries are fascinating places. Plots of land where, traditionally, humans bury the dead, they sometimes serve as places that almost exist out of time, preserving a record of the people who lived in the adjoining communities going back to the first settling of the area by humanity.  Often quiet, well-tended but also protected and largely devoid of people, cemeteries sometimes serve as areas that straddle the developed and natural world.  In that capacity, they can be home to a variety of flora and fauna, and can be great places to go to observe birds, small mammals and other creatures. On the other hand, most modern cemeteries in this part of New England are lawn cemeteries, where grass is maintained as the dominant variety of plant life in the cemetery (except for a sprinkling of trees, shrubs and the occasional planted flower or garden), which tends to limit the biodiversity of the land that the cemetery is located upon.

Most traditional cemeteries are known for the headstones that mark the graves of the individuals buried there .  A headstone (and sometimes a larger monument that serves the same purpose) includes some information about the individual buried there....often a name, date of birth and death, sometimes information about the deceased relation to other people buried nearby, and occasionally including info about the role the deceased played in society and/or their family during their lifetime, often along with some sort of decorative art.  This information is traditionally carved onto the surface of some sort of durable stone, such as marble, granite, limestone, sandstone or slate, which makes up the body of the headstone.  While preserving the memory of the deceased, headstones also can serve as habitat for a variety of organisms that often are overlooked.  Most are probably familiar with lichens and mosses that grow on many headstones.  Some probably consider these growths to be eye-sores, and many believe they are quite destructive to a gravestone, slowly eroding the stone and damaging the text and decorations the stone contains.....shortening the life of the stone.  While this maybe the case, the fact that headstones are most often outside and completely exposed to the elements, the reality here is that no headstone is going to last forever without heavy human intervention.....weather, biology, soil geology, vandalism and random events are going to wreck the stones eventually.  However, most people have probably not put too much thought into the miniature ecosystems that exist on these stones; the lichens, mosses, fungi and bacteria that live on the surface of headstones serve as the foundations for a web of life on a very small scale.  It is these miniature ecosystems (and the larger-scale ecosystem of the cemetery itself) that we are interested in studying......this is the foundation of the Chapel Cemetery Biological Diversity Project. 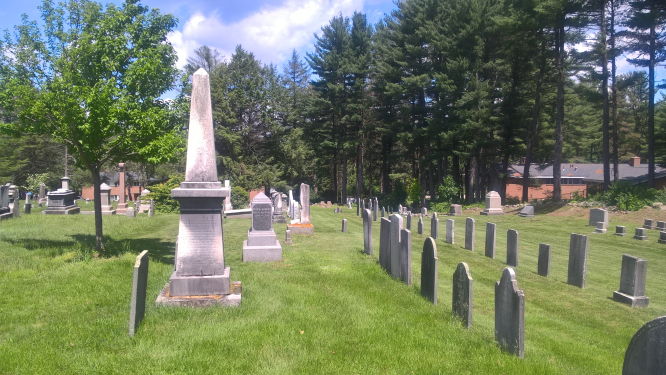 The Chapel Cemetery Biological Diversity Project is an effort to catalog and characterize the organisms that make their homes in the Chapel Cemetery, a cemetery on the campus of Phillips Academy that contains graves that date back to 1818.  It contains a variety of headstones cut from a wide array of stone and of varying ages, which makes an ideal natural experiment and environment in which to examine the diversity of organisms that have taken up residence on these stones and in the surrounding cemetery.