Communities are made up of populations of different species. In biology, a population is a group of organisms of the same species that live in the same area. The population is the unit of natural selection and evolution. How large a population is and how fast it is growing are often used as measures of its health.

Population size is the number of individuals in a population. For example, a population of insects might consist of 100 individual insects, or many more. Population size influences the chances of a species surviving or going extinct. Generally, very small populations are at greatest risk of extinction. However, the size of a population may be less important than its density.

Population density just gives the average number of individuals per unit of area or volume. Often, individuals in a population are not spread out evenly. Instead, they may live in clumps or some other pattern (see Figure below). The pattern may reflect characteristics of the species or its environment. Population distribution describes how the individuals are distributed, or spread throughout their habitat. 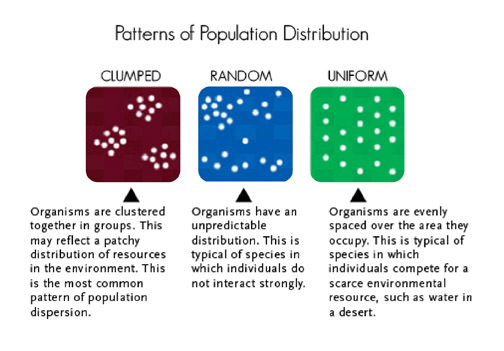 Patterns of Population Distribution. What factors influence the pattern of a population over space?

Age-sex structure is represented by a population pyramid. This is a bar graph, like the one Figure below. In this example, the bars become narrower from younger to older ages. Can you explain why? 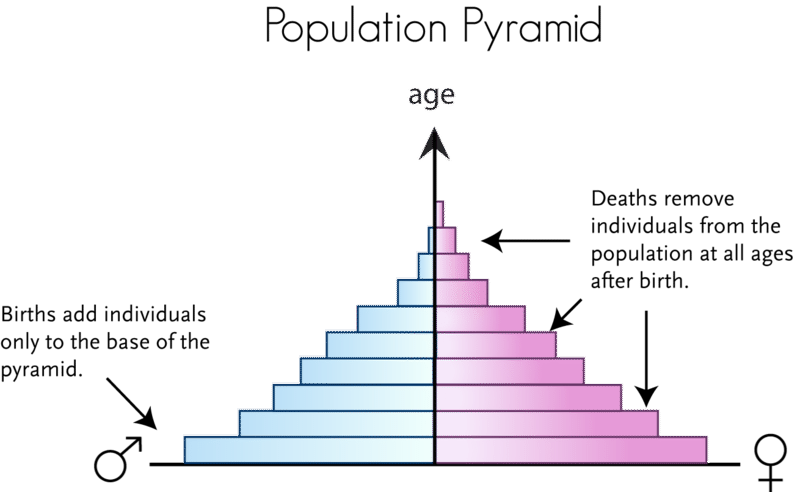 Population Pyramid. A population pyramid represents the age-sex structure of a population.

Another way to show how deaths affect populations is with survivorship curves. These are graphs that represent the number of individuals still alive at each age. Examples are shown in Figure below. 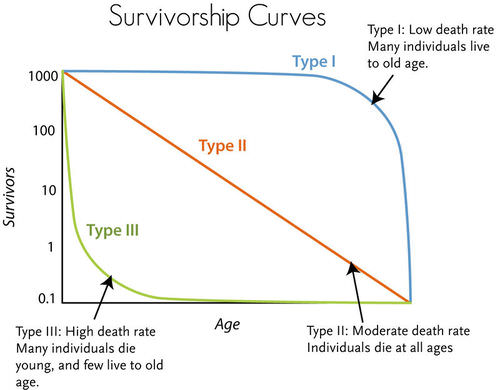 The three types of curves shown in the figure actually represent different strategies species use to adapt to their environment:

Other types of movements may also affect population size and growth. For example, many species have some means of dispersal. This refers to offspring moving away from their parents. This prevents the offspring from competing with the parents for resources such as light or water. For example, dandelion seeds have “parachutes.” They allow the wind to carry the seeds far from the parents (see Figure below). 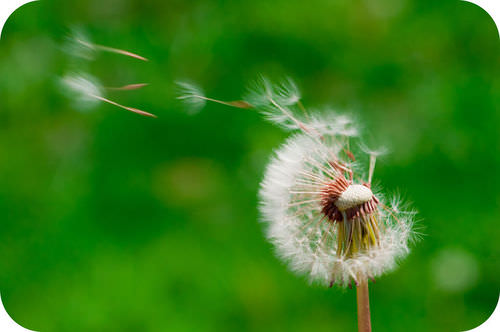 Dandelion Seeds. These dandelion seeds may disperse far from the parent plant. Why might this be beneficial to both parents and offspring?

Migration is another type of movement that changes population size. Migration is the regular movement of individuals or populations each year during certain seasons. The purpose of migration usually is to find food, mates, or other resources. For example, many Northern Hemisphere birds migrate thousands of miles south each fall. They go to areas where the weather is warmer and more resources are available (see Figure below). Then they return north in the spring to nest. Some animals, such as elk, migrate vertically. They go up the sides of mountains in spring as snow melts. They go back down the mountain sides in fall as snow returns. 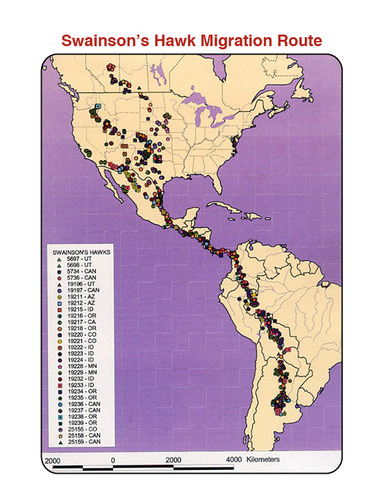 Swainson’s hawks migrate from North to South America and back again each year. This map shows where individual hawks have been identified during their migration.

Populations may show different patterns of growth. The growth pattern depends partly on the conditions under which a population lives.

Under ideal conditions, populations of most species can grow at exponential rates. Curve A in Figure below represents exponential growth. The population starts out growing slowly. As population size increases, the growth rate also increases. The larger the population becomes, the faster it grows. 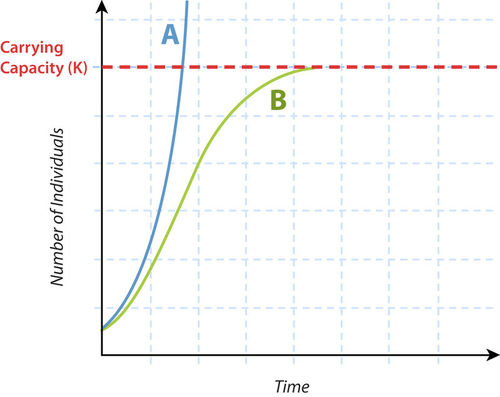 Most populations do not live under ideal conditions. Therefore, most do not grow exponentially. Certainly, no population can keep growing exponentially for very long. Many factors may limit growth. Often, the factors are density dependent. These are factors that kick in when the population becomes too large and crowded. For example, the population may start to run out of food or be poisoned by its own wastes. As a result, population growth slows and population size levels off. Curve B in Figure above represents this pattern of growth, which is called logistic growth.

Species can be divided into two basic types when it comes to how their populations grow.

1. What is population density?

3. What is migration? Give an example.

4. Write the formula for the population growth rate. Identify all the variables.

5. State why dispersal of offspring away from their parents might be beneficial.

7. What are K-selected and r-selected species?

9. Assume that a population pyramid has a very broad base. What does that tell you about the population it represents?

10. What can you infer about a species that has a random pattern of distribution over space? A uniform pattern?

11. Compare and contrast Type I and Type III survivorship curves.